Ghanaians Take to the Streets to Protest Worsening Economic Conditions, Call on President Akufo-Addo to Resign

By Daniel AbugahNovember 6, 2022No Comments 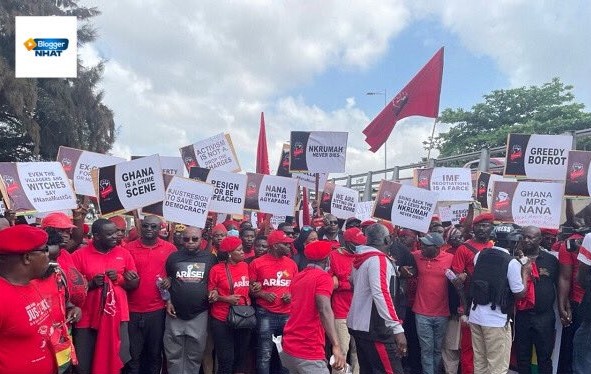 Human rights and economic freedom advocates on Saturday, November 5, led hundreds of Ghanaians and civil society groups in a street protest, demanding that President Nana Addo Dankwa Akufo-Addo resign from office over his failure to address prevailing economic hardships in the country.

Human rights lawyer and convener of the demonstration, Martin Kpebu who started the campaign for the resignation of President Akufo-Addo sometime before the demonstration day, indicated that the President continues to sit aloof as the fortunes of the nation are being eroded leaving the citizenry hungry and in despair. He, therefore, called on other Ghanaians to support calls for the President to step down.

“Citizens have a duty as stated in Article 41 of the Constitution to ask the President to resign” Mr.  Kpebu noted.

The protesters asked the president to resign alongside his vice, Dr. Mahamudu Bowumia, the head of the economic management team.

In a blog post on the Ghanaian current economic situation and President Akufo Addo’s government’s inaptitude to deal with it, the vice president of policy thinktank at IMANI Africa, Bright Simons, noted that the crisis unfolded for many months without the President addressing the nation on measures until he was prompted by a revolt against his finance minister from his own party.

The policy analyst observed that Ghana, with an inflation figure of 37% (annual average of 32%) and climbing, is currently only behind Zimbabwe and Sudan in terms of absolute inflation numbers.

“The government’s continued spinning around the fact that its missteps and miscalculations have contributed significantly to the crisis makes it difficult to trust it to reverse course on those tendencies exacerbating the crisis. It puts to doubt the quality of any fiscal adjustment program, including the planned IMF one”, he stated.

The Ghanaian Cedi is currently the worst-performing currency in the world, according to www.bloomberg.com of October 17.

Living conditions of Ghanaians have worsened over the past couple of months, due to record-time depreciation of the Cedi against the United States Dollar and other major trading currencies, coupled with an escalating price of fuel, resulting in a hike in daily transportation fares and goods and services.