By Killian NgalaOctober 25, 2022No Comments 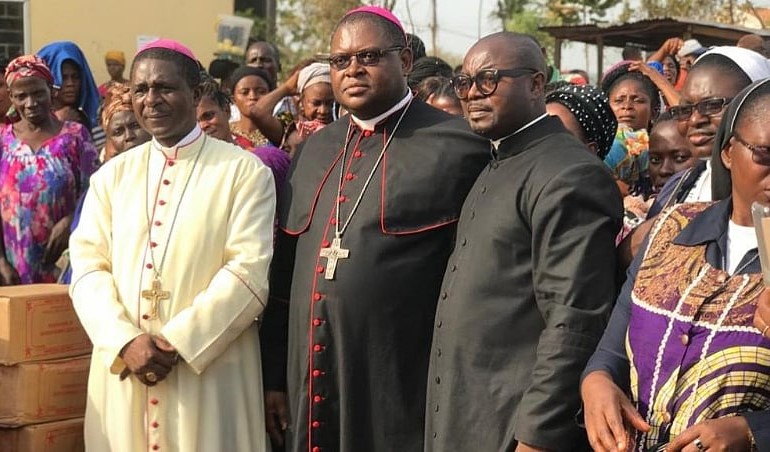 It’s been a sense of euphoria and victory across Cameroon following the release of five priests, a nun, and three other Church workers.

The nine, kidnapped over a month ago regained their freedom on October 23 in what the Bishop of Mamfe, Mgr. Aloysius Abangalo Fondong said was a great relief for the Church after enduring “over a month of pain and sorrow” with the knowledge that the religious were held captive.

“I announce with great joy the release of all nine who were abducted,” said Bishop Aloysius Abangalo Fondong of Mamfe Diocese in a release, on October 23.

“I am sincerely grateful to all who joined us in the collective effort in praying for the safety and release of our brothers and sisters. Words will only do scant justice in expressing my sentiments of gratitude to all those who collaborated with us in the process of negotiating for their safety and release,” the cleric said.

The bishop didn’t say whether a ransom was paid, but an official of the Nigerian Commission for Refugees, Migrants, and Internally Displaced Persons said his office was very much involved in securing their release.

Nchang village where the nine were kidnapped borders Nigeria.

Speaking on the condition of anonymity for fear of being targeted, the Nigerian official told Timescape Magazine that a refugee who was in contact with the kidnappers and their activities acted as an informant to his office.

“This led to my writing a letter to my Headquarters (NCFRMI), the Department of State Security (DSS) and the Office of the National Security Adviser (NSA) of the Federation,” he said.

He said his office worked collaboratively with these various services and the refugee to finally secure the release of the religious.

Gunmen, still unknown to date, swooped into the St. Mary’s Parish, Nchang village in the Mamfe Diocese in the restive former UN Trust Territory of British Southern Cameroons on Friday, September 16, and burnt down the Church before taking the nine religious away.

A video later surfaced online in which the frail-looking hostages were begging for their freedom.

Then the news of their release came on October 23, first through a video in which one of the hostages thanked Southern Cameroons pro-independence forces for releasing them “without asking for ransom,” and then followed by the official communiqué of the bishop.

Their release has been greeted by clergy and lay Christians across the country.

Reverend Father Leonard Zifac of Kumbo Diocese said he had a feeling of “deep pain” but that has been transformed into “brilliant rays of joy.”

“It seemed the voice of prayers had gone silent, and that God was taking too long to respond. Their release made me more confident that my prayers were never wasted; I believe in God more. I had to play between diplomacy and emotions just hoping deeply that they will be released and safely. Then the Lord acted. I pray they are given adequate psychosocial support as well as proper medical attention,” he said.

Bertha Fonyam Ananga, a top-ranking member of the Catholic Women Association (CWA) said it was a case of answered prayers.

“We thank God for His Mercy and Protection on them while in captivity, for answering the prayers of His people and reassuring, confirming and deepening our Trust in Him,” she told Timescape Magazine.

And Fr. Vuni Tiberius, Director of Caritas Mamfe and Parish Priest of St. Martin of Tours Kembong said he was happy to be “reunited with my kidnapped brethren.”

He said their release was “the great news of truth unfolding before my eyes,” and “a moment of joyful feelings reigning over me. I am a happy man to see these people back and safe. Though they look drained and weighed down and overstressed. I am happy to see them once again. This is one of the powerful witnesses of the power of prayers. We have been praying for their release and God through the intercession of the Blessed Virgin Mary has answered our prayers. I was also privileged to celebrate the first Holy Eucharist with them after their release. You can understand what it means for a priest and religious and Christ’s devoted faithful not to celebrate or to attend mass for 37 days. It is a moment of joy, a moment of celebration, and a moment of Thanksgiving to God for this wonderful reunion.”

And the spokesperson of the bishops’ Conference Fr. Humphrey Tatah Mbuy said the recent case is a sign that “the armed conflict in the North West and South West regions has taken a turn which is not for the good of anybody.”

He said at least two priests had been killed since the conflict began. Bishops, priests, nuns, and Christians have been kidnapped, he said, and Church buildings, schools and hospitals have been razed.

This led the minority English speakers to start fighting for self-determination for the former UN Trust Territory of British Southern Cameroons, with plans to rename it Ambazonia.

The fighting has led to the deaths of at least 6,000 people, and over 750,000 people forced to flee from their homes.

Fr. Mbuy said the attacks on the Church will never deter her from continuing with her prophetic mission-that of seeking truth, peace, and justice in society.